The following analysis will show that Trump is doing as well or better than the previous GOP “presumptive” nominees at this stage in the game.

Things change over each election cycle, so comparing apples to apples is never 100%.  There are several factors that need to be considered to compare voter turnout, delegate counts, state by state comparisons, etc., this analysis by no means accommodates everything to make it a completely fair comparison, but it is good enough to make some conclusions on.

First, the “Heavy Heights” or “Viable Candidates” in a race.  I am taking into consideration when the first one dropped out, and how many elections took place before the drop out.

Another factor is that the same states did not vote within the same time frame of the first heavy weight candidate to dropout, e.g. in 2008 California voted on February 5th, giving John McCain over a million votes.  California has not yet voted in 2016 and did not vote until June 5th in 2012 (after Santorum and Gingrich dropped out).

These numbers include the following for each election:

In addition to those notes, there are changes to the number of delegates needed to get the nomination:

With these clarifications and explanations, let’s look at how the three front runners stacked up against each other, based on the first 35 or so states that voted (described in bullets above).

The first chart (top left) is simply showing the number of races completed, based on the explanation above.

The top right chart shows the number of victories per candidate.  Notice despite less races Trump has more wins than McCain did at this stage, and is only 2 behind Romney, which happens to be the same difference between the total contests being considered between the two.

The bottom left chart shows the delegate count per candidate (adjusted for inflation according to the bullet points above).  Again, all the numbers are similar, despite Trump having less total contests than the other two in this analysis.

The biggest story is the bottom right chart, “Sum of Votes”.  8% was added to McCain and 3% to Romney for population growth, and Trump still smashes both of them by 51% and 68% respectively.  In fact there are only four individual contests where McCain or Romney beat Trump in the popular vote:

Everything else, Trump wins, and usually big time, as is reflected in the total votes:  Trump 7.8M, Romney 4.5M, McCain 5.2M.

The conclusion is that Trump is doing as well, if not better than Romney and McCain when the media was trumpeting them as the nominee.  Although the comparison is not 100%, there is no reason to assume Trump is a weak candidate, and arguably what the “dying” Republican Party needed.  It is obvious that the political class is not afraid of the party dying or of Hillary winning, but of Trump and how he would shake things up, otherwise they would have embraced the energy he brought to their little party.

For additional details, the states included in this calculation are as follows, blanks mean the state did not vote within the date windows or was omitted for reasons I described above: 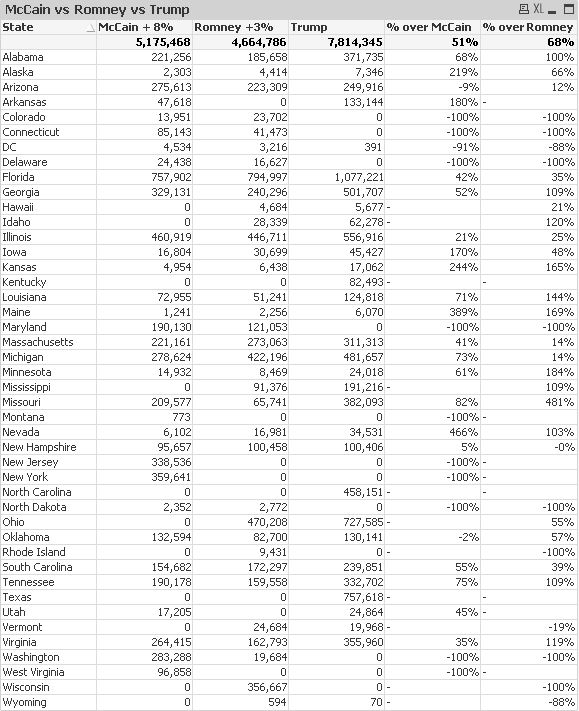 2 thoughts on “Donald Trump vs Mitt Romney vs John McCain”