My previous posting, “How Donald Trump Wins with No Contested Convention”, walked through the next 14 contests (including New York), showing a path to victory for Donald Trump.  I was purposely cautious with New York and the other North Eastern states.  That path to victory included only 68 delegates from New York, but as we all saw, Trump did much better, getting 89 (maybe 90) of the 95 delegates.  This new walk through will attempt to guess how his campaigns is figuring 1,400 delegates before the convention.

How the Presidential Primary Race is Going So Far

Just as a quick refresher, the current layout is as follows: 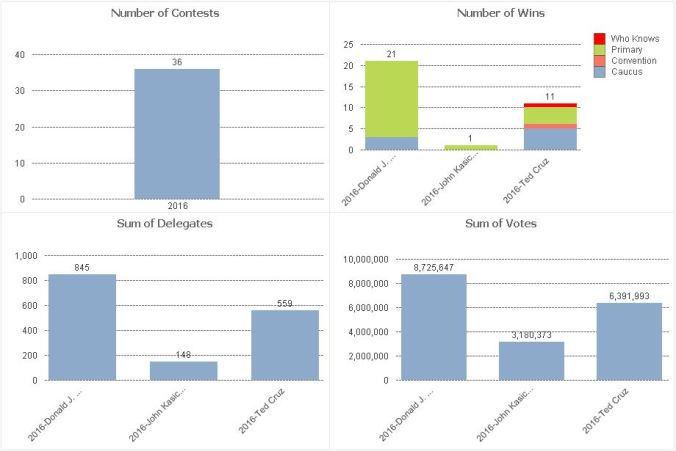 The big difference between New York and Wisconsin is that Trump had supporters turn out in Wisconsin.  Trump received almost 400K votes in Wisconsin, but in New York Cruz hardly broke 125K.

Tuesday, April 26 there are five more contests.  All of them are in the North East.  Since Trump has outperformed the polling data in New York (+7%), Massachusetts (+4%), and New Hampshire (+4%), I am going to assume that Trump will do better in those states then current polling.

At this point Trump now has increased his lead substantially over Cruz.  It was previously mathematically impossible for Cruz to reach 1237, but now he needs 166 more delegates then whats available:

After the North East States, Cruz Support Will Weaken

Next we are at the last set of primaries, June 7.  Consider where each candidate sits at this point:

Tuesday, June 7:  I finally get to vote in California!  Remember, the Inland Empire supports Donald Trump!

Going into these elections Trump almost doubles Cruz in delegates and he also needs less than half of the remaining delegates, only 41% of them (although New Jersey is 51 delegate winner take all, he could win New Jersey and 41% of the California delegates and lose everything else and still hit the number), but for fun lets walk through it. 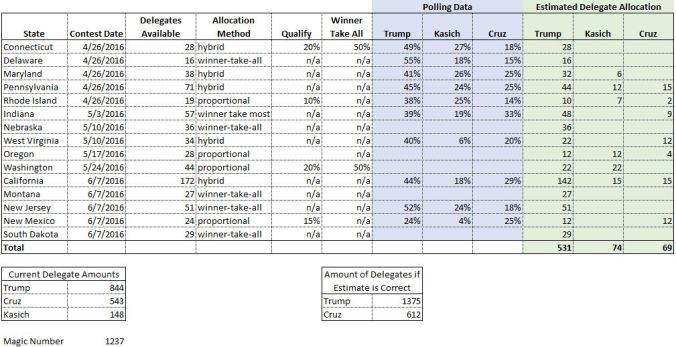 Trump has 1375.  Also remember, by this time he will have roughly 4.5M more votes than Cruz.

6 thoughts on “The Trump Campaign Will Get Roughly 1,400 Delegates”