Obsessing over polling headlines, the drudgereport.com has been hyping up the “blue wave” and specifically targeting Ted Cruz in Texas, for example: 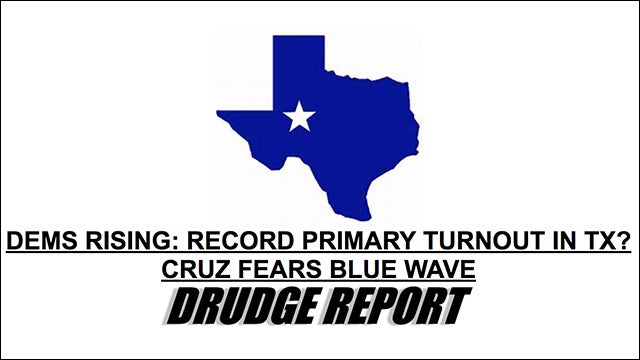 Drudge also headlined the other day something about Cruz being in “the fight of his life”, which is odd, I thought running (and losing) against Trump in 2016 would have been a bigger battle than a pesky open borders Democrat, Beto O’Rourke.  The point is, that Drudge is echoing MSM talking points because polls are showing a tight race.

realclearpolitics.com shows the average for the Cruz vs O’Rourke race is tight, it is so close…only 4.4 points to make Texas blue:

Looking into the polls, they all show that Texas Republicans have lukewarm support for Trump and Cruz.  For example, in the most recent Emerson poll, Trump has a 44% favorable rating in the entire state!  That does not pass the smell test.  Who is being interviewed for these polls?  My theory is that the fake pollsters believe the fake news that there is a blue wave, so the fake polls interview more democrats than republicans, because they assume their is more energy among them, which causes the fake news to report more about the blue wave, and the cycle feeds itself.

In 2012, the Texas Republican primary battle, which was vicious, included the initial round of voting, where 1.4M Republicans turned out. Upstart Ted Cruz and establishment candidate lieutenant governor David Dewhurst were the top vote getters and went to a run off where 1.1 million votes were cast (Cruz won).  On the Democrat side in 2012, there was a turnout of 500,000.  In the general election Ted Cruz sailed to victory by 16%.  Even with the vicious primary, Republicans united around their candidate.

Fast forward to 2018…This years primary turned out a lot of Democrats, between the living and the dead about 1,000,000 people participated in the Democrat primary, 62% of which voted for O’Rourke.  But guess what?  Republicans turned out 500K more voters, even though there was no serious challenge to Cruz.  AND 85% of Republicans voted for Cruz.  85% of your party turning out (and in large numbers) does not suggest you have lukewarm appeal as the polls show.  Just like Arizona, Florida, and other places, there is just as much energy on the MAGA side of this election as the resistance has.

An actual election, where people get up and vote, is a much better indicator of what public opinion is than a random poll.  So you say, of the 2.5 million people that voted in the Texas primary, over 60% are Republicans and Ted Cruz has more than 85% of his parties support.

It is good that Trump and Cruz are holding a rally together, and Cruz should not take this for granted, but Texas is still a strong red state.

2 thoughts on “Texas Senate Race, Ted Cruz Will Win and the Problem With The Polls”